A complete guide to financial consolidation under ASC 810

ASC 810 is a US GAAP accounting standard set by the Financial Accounting Standards Board (FASB), providing guidance for companies with multiple entities to remain compliant when consolidating their financials. It’s similar to IFRS 10, the standard implemented by the International Accounting Standards Board (IASB), but differs in some key areas. Whether your company is merging with another, acquiring a smaller company or expanding into new territories, it’s critical that your team is fully aware of the guidelines set out under this standard.

This blog offers an introduction to ASC 810 to help your team better understand the complexities introduced by the accounting standard and gain insight into how to maintain compliance when preparing consolidated financial statements. If you have more general questions or need a refresher on the topic, check out our complete guide to financial consolidation before you continue reading this blog.

The objective of ASC 810 for consolidated financial statements

In the past, determining the parent entity after a merger or acquisition often came down to percentage ownership. In an effort to address the growing number of variations in multi-entity business structures, FASB issued FIN 46R, which introduced the concept of “control exercised through economic power”. This concept means that ownership percentage is secondary to an entity’s ability to influence decision-making and financial results through contractual rights and obligations and risk exposure.

The consolidation evaluation process under ASC 810 incorporates this principle from FIN 46R. Today, companies can determine the parent entity by evaluating ownership percentage as long as the entity in question does not meet the criteria to be considered a “variable interest entity” or VIE.

Be vigilant in assessing entities for economic power

When evaluating each subsidiary or entity for consolidation, you must familiarize yourself with two key models introduced by ASC 810: the Variable Interest Entity (VIE) Model and the Voting Interest Model (VIM). Under the VIE model, a controlling financial interest in a VIE exists if the reporting entity has both:

Under the VIM, the reporting entity displays a controlling financial interest if it possesses a majority voting interest in another entity. Depending on certain circumstances, like contractual provisions or agreements between shareholders, the power to control may exist even when one entity holds less than 50% voting interest.

Determining whether to use the VIE model or VIM

To properly determine whether an entity meets the requirements for consolidation under the VIE model or VIM, the following are some of the questions that should be asked about each entity:

Is it a legal entity?

Some of the criteria that can help you determine if an entity is a legal entity are as follows:

Does it meet the definition of a business under ASC 805?

ASC 805 defines a business as: “An integrated set of activities and assets that is capable of being conducted and managed for the purpose of providing a return in the form of dividends, lower costs, or other economic benefits directly to investors or other owners, members or participants.” (805-10-55-3A).

Does the entity hold a variable interest?

A variable interest is defined as any interest or combination of interests that absorbs an entity’s variability. Although there is no specific list that outlines all variable interests, they are often assets such as receivables, leases, economic benefits, performance obligations, loans, or even an exercisable right to purchase an asset at a fixed rate. 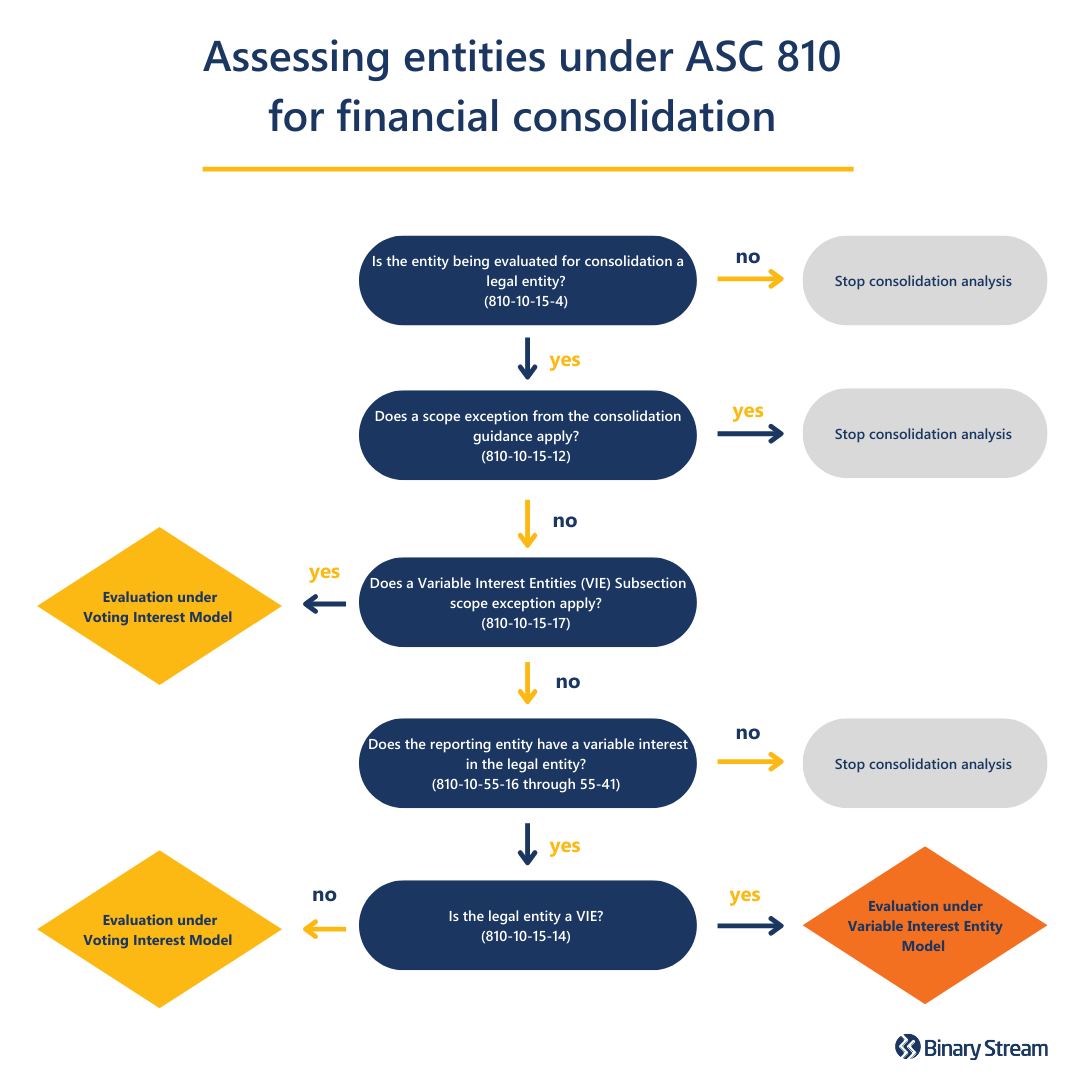 When applying the Variable Interest Entity Model, an entity is likely a VIE if it satisfies the following conditions:

However, the most helpful resource for companies trying to decide whether they should consolidate under ASC 810 is the VIE model decision tree pictured in the image below. 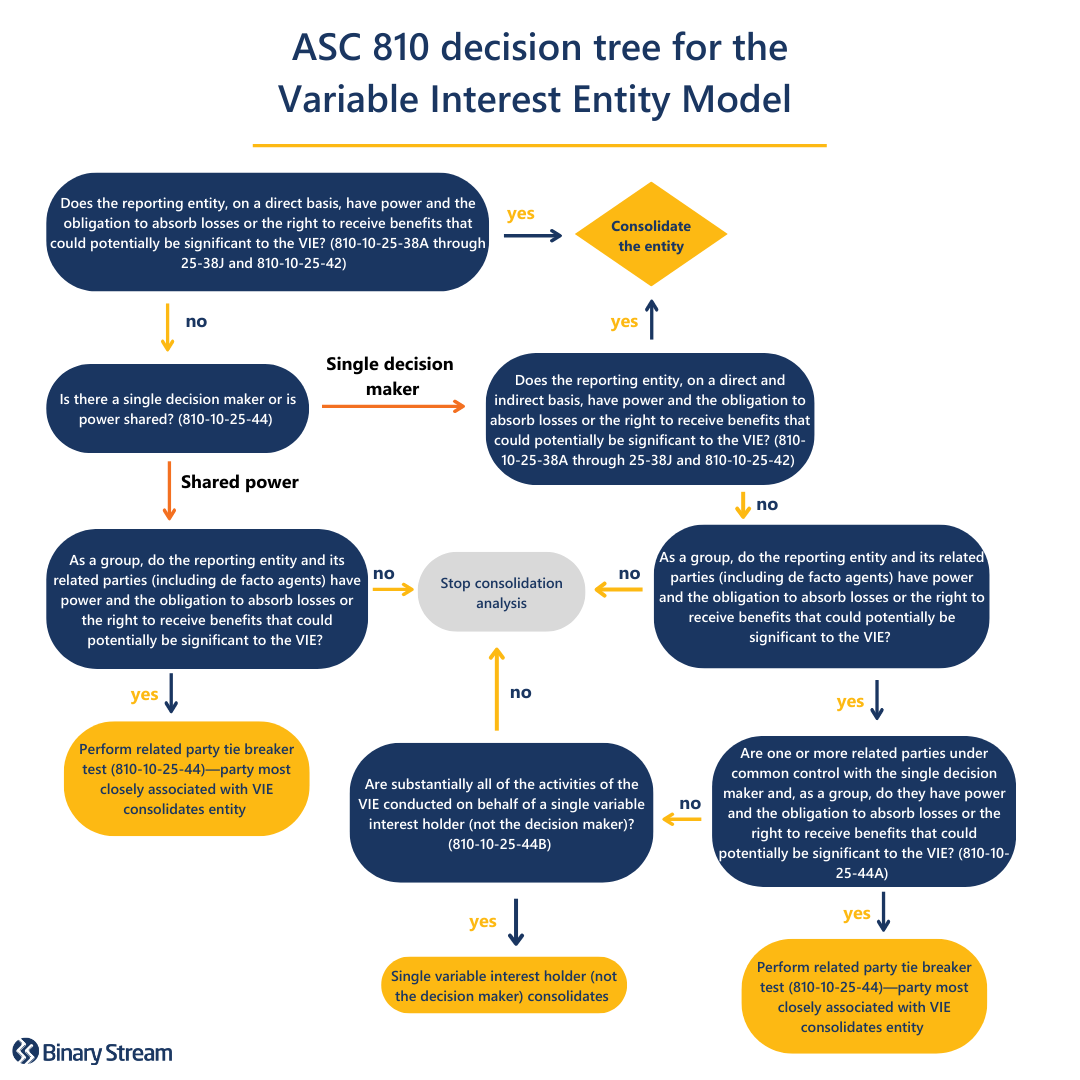 Entities that consolidate under the Voting Interest Model (VIM)

The Voting Interest Model (VIM) is a much simpler model that is familiar to most accounting teams. If a company does not meet the requirements to consolidate under the VIE model, it must look at the VIM. Put simply, this model requires that a company consolidates an entity if it owns the majority of that entity, i.e., over 50%. 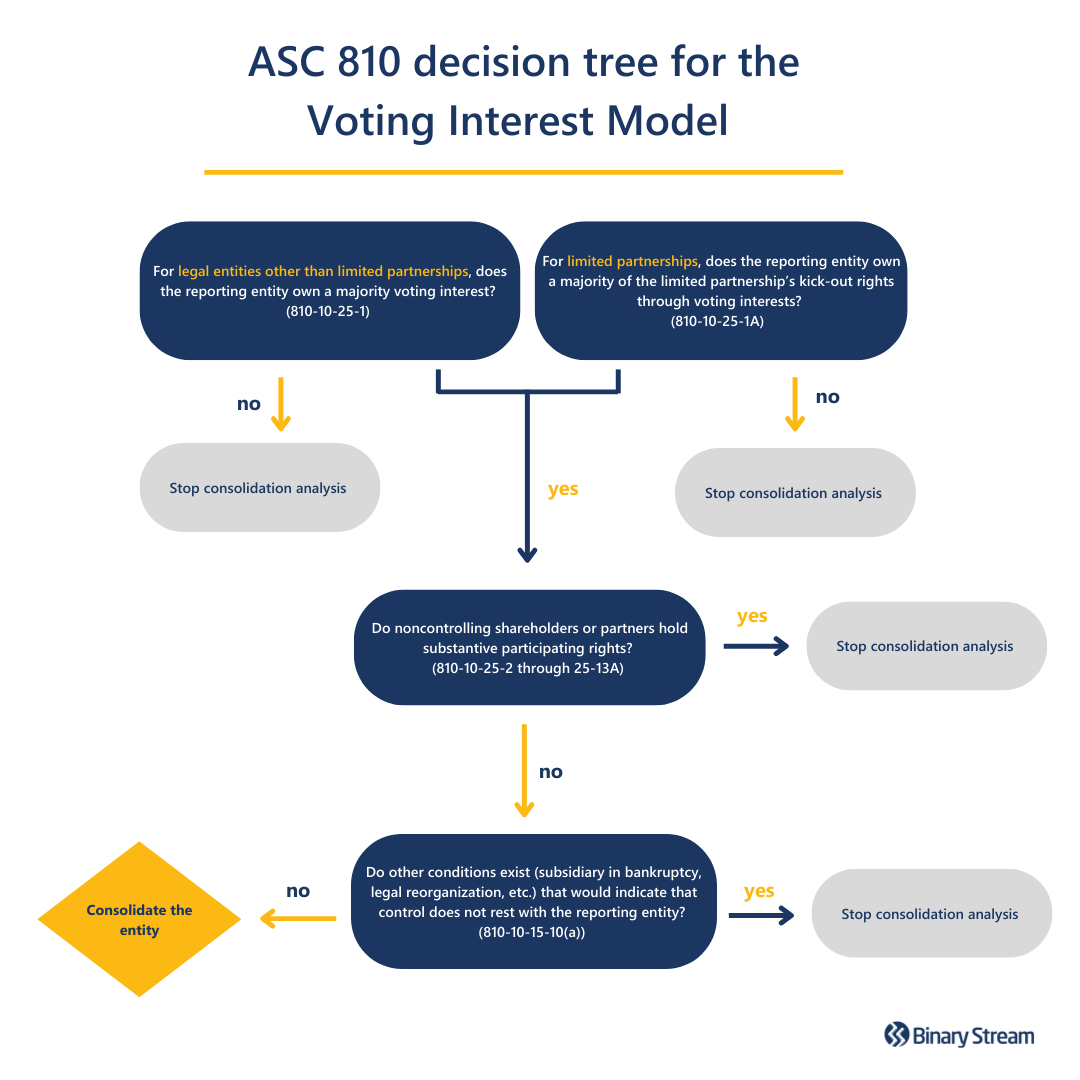 With the most recent amendments to ASC 810, general partners must follow the new guidance and likely will no longer need to consolidate limited partnerships. This makes sense as the general partner typically does not truly have control and often acts as a service provider for the other partners. Nevertheless, general partners must provide more extensive disclosures in their financial statements, as most limited partnerships are now considered VIEs under the new guidance (810-10-15-14).

Choose accounting software built to handle the complexities of ASC 810

When it comes to compliance for financial consolidation, most companies will face a few challenges. You must invest in software that can appropriately meet the demands of accounting for multiple entities under GAAP regulations. Why not check out Multi-Entity Management, a solution built to help your company simplify processes and streamline financial consolidations.